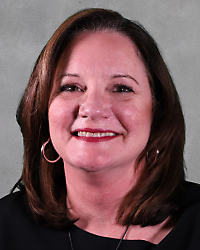 Mrs. Wright, a native of Southern California, relocated with her family to Henderson, Nevada, in June 1999. Mrs. Wright and her husband, Jason, were married in July 1991 and have two children, one a Clark County School District (CCSD) graduate, class of 2011, and the other a current CCSD student. After graduating high school in 1989 she transitioned to Fullerton College to study Travel and Tourism later working as a travel agent. Prior to her election to the Clark County School District Board of Trustees, Mrs. Wright was an active parent volunteer working on issues such as zoning, school safety, school start times, small schools committee, the Reflection art program, school Harvest Festival committee, standard student attire and served as school PTA President.

Mrs. Wright and her family enjoy ocean sports, playing on the beach, movies, board games, and Scouting. Her eldest son is an Eagle Scout while her younger son is a Star Scout and active in his troop. Mr. Wright is a Scout dad that camps, hikes, and teaches merit badges when needed. Mrs. Wright has served many years in the Cub Scout program through her church as well.

Trustee Wright believes that education is the best investment Nevadans can make for their future. Her firm belief is that investing in education now will help build a stronger foundation for Nevada in the future. The mission of the Clark County School District; to ensure that all students will graduate from high school prepared for the work force, trade school, or college; is something that Mrs. Wright takes very seriously. She constantly works to secure more dollars for education, while also shaping policy to ensure meaningful and discerning changes for the District.